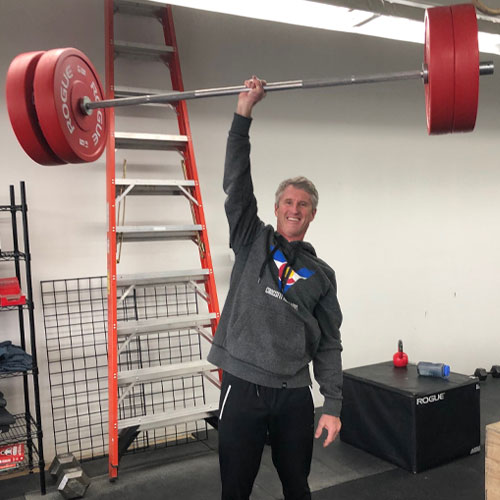 Chris is passionate about fitness, loves to teach, and is the Vice President of Sales and Marketing for a company that makes color, in that order. He moved to Colorado in 1992 to be a ski instructor, met his wife Vicki, and never left. Chris has been a weekend warrior athlete for decades. He has competed in over 50 endurance races, with a passion for Triathlon and multi-sport competitions. When asked, he will tell you his best race experiences were the Silverman Ironman Triathlon, Leadville 100 Mountain bike race, and most recently qualifying for the US National Triathlon Championships in his age group in 2016. He is a running enthusiast, and has participated in multiple POSE Method running clinics, which he promotes and teaches whenever possible.

Chris was introduced to CrossFit in a neighbor’s garage gym in 2014, and was instantly hooked. In 2015 he joined Ken-Caryl CrossFit, and has been working out there ever since. “I had never seen the kind of results, in such a short period of time, as I did when I started CrossFit”. He loves sharing his passion for fitness with other members. He loves teaching the mental aspect of working out, and promotes “The Power of Presence”, which is all about being entirely present and engaged in the workout so you can learn from it.

When he is not working out, Chris does go to work, tries to keep up with his 3 teenage kids, loves yoga, and goes to bed early. He is always into trying new things, searching for the next adventure, and looks forward to helping you achieve your fitness goals.