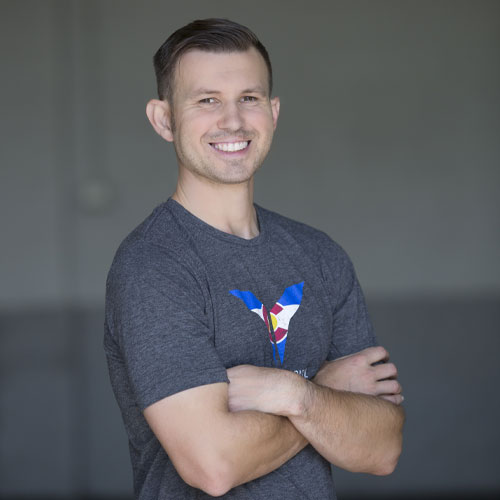 If Captain America and Ronda Rousey were to have a baby, it would look like Joel.

Joel was born and raised in the second best place in the US, the great state of Ohio. A Buckeye from birth, Joel attended The Ohio State University where he met his wife Ann Marie while playing pickup basketball. He knew she was the one when she, the only girl on the floor, was dominating the boys. It took Ann Marie a little while to appreciate Joel’s wit and boyish charm, but she came around and they were married in 2007. Joel was introduced to Crossfit in 2010 through doing CrossFit.com workouts in a friend’s garage. When Joel and Ann Marie moved to the best place in the US, the great state of Colorado, they knew one of the first things they would do would be to find a great gym, which led them to Crossfit Ken Caryl. When he’s not at the gym, Joel likes to go flying as he has his commercial pilot certificate. He also loves to play and watch all sports, enjoys being a contestant on the Price is Right (Episode 7131K, May 11, 2015), and uses every excuse he can to get outside to enjoy Colorado. If someone were to ask Joel who’s hair he envies and tries to emulate, his answer would be Avalanche captain Gabriel Landeskog, who incidentally has the best hair in hockey (this fact cannot be disputed).

Joel’s favorite cheat meal is pizza… every day and twice on Sundays.

The son of two music teachers, Joel grew up singing in church with his family. (Think von Trapp family style, but in rural Ohio instead of Austria, and there were only 5 members of the Box family). There is most certainly embarrassing video of Joel singing as a youngster, video that Joel would pay great sums of money to prevent from being released to the general public.